This post about my visit to Delhi was inspired by another blog “Shankar Market, Old Delhi and the Weekend” – click, visit and see some more lovely photos with great colours.

Also see “Where the guys gives roses” by the same author.

Whilst  reading THE CULTUREUR this afternoon, I came across the post SPIRITUAL CHAOS ON THE HARIDWAR GHATS ALONG THE GANGES RIVER.

I immediately thought of Varansi (calm and chaos) and this inspired me to pull out some photos I recorded there during my last trip to India in 2011/2012.

I first went to India in 2009/10: see related blog here and some other photos here. 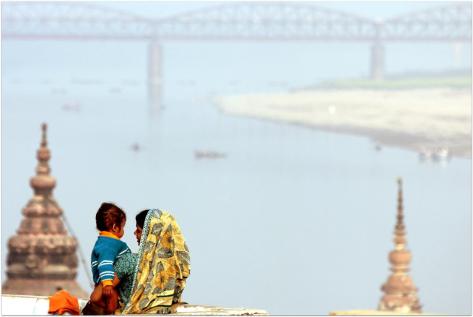 I have inserted my photos above, below and in between the comment by Wikipedia that enlightens us as follows “Varanasi (Hindustani pronunciation: [ʋaːˈraːɳəsi] (listen)), also commonly known as Benares, Banaras (Banāras [bəˈnaːrəs] (listen)) or Kashi (Kāśī [ˈkaːʃi] (listen)), is a city on the banks of the Ganges in the Indian state of Uttar Pradesh, 320 kilometres (200 mi) southeast of the state capital Lucknow. 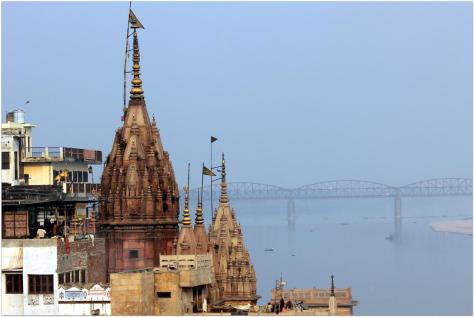 It is regarded as a holy city by Hindus and Jains, and holiest of the seven most sacred Hindu cities (Sapta Puri), of its ancient historic, cultural and religious heritage. Hindus believe that death at Varanasi can bring salvation.

Body being transported to a ghat for cremation

It is one of the oldest continuously inhabited cities in the world and the oldest in India.

Unfortunately many of its temples were subject to plundering and destruction by Mohammad Ghauri in the 12th century. The temples and religious institutions seen now in the city are mostly of the 18th century vintage.

The Kashi Naresh (Maharaja of Kashi) is the chief cultural patron of Varanasi and an essential part of all religious celebrations. 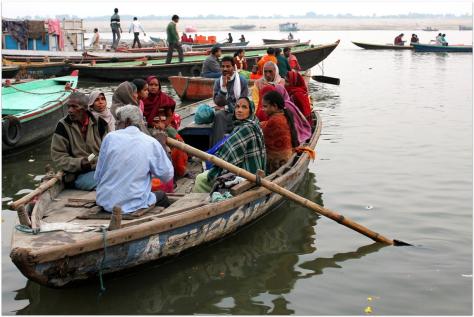 The culture of Varanasi is closely associated with the River Ganges and the river’s religious importance. 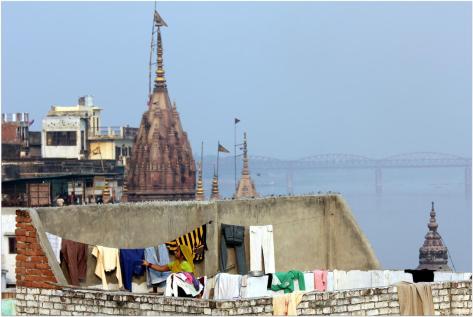 The city has been a cultural and religious centre in North India for several thousand years and is one of the world’s most important religious centres with a history which transcends and unites most of the major world religions.

The Benares Gharanaform of the Indian classical music developed in Varanasi, and many prominent Indian philosophers, poets, writers, and musicians resided or reside in Varanasi. Gautama Buddha gave his first sermon at Sarnath located near Varanasi.

Varanasi is today considered to be the spiritual capital of India.Here scholarly books have been written.

Ramcharitmanas was composed by Tulsidas here while there is the temple Tulsi Manas Mandir that is famous here.

In addition to this, the largest residential University of Asia, Benares Hindu University is located here. 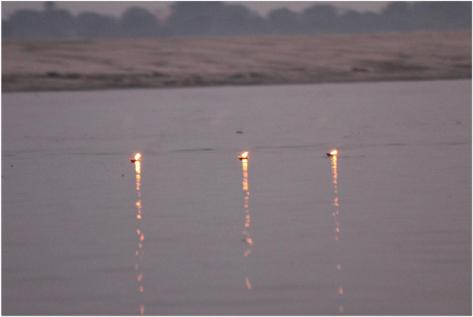 Ghats in Varanasi are an integral complimentary to the concept of divinity represented in physical, metaphysical and supernatural elements. 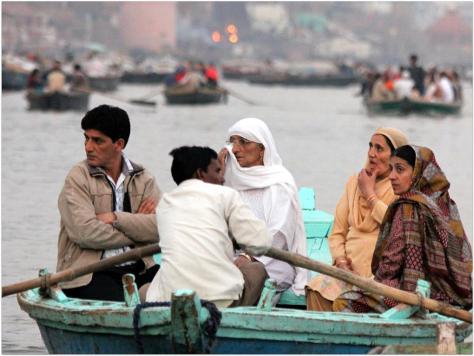 All the ghats are locations on “the divine cosmic road,” indicative of “its manifest transcendental dimension.” Varanasi has at least 84 ghats. 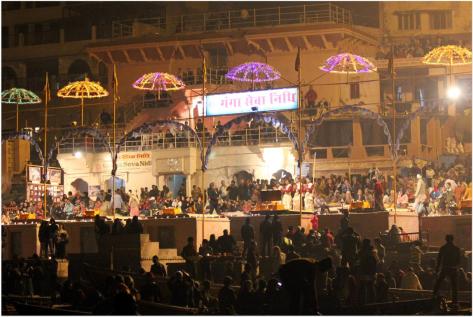 Steps in the ghats (ghats are embankments made in steps of stone slabs along the river bank where pilgrims perform ritual ablutions) lead to the banks of River Ganges, including the Dashashwamedh Ghat, the Manikarnika Ghat, the Panchganga Ghat and the Harishchandra Ghat (where Hindus cremate their dead).

Many ghats are associated with legends and several are now privately owned.Many of the ghats were built when the city was under Maratha control. 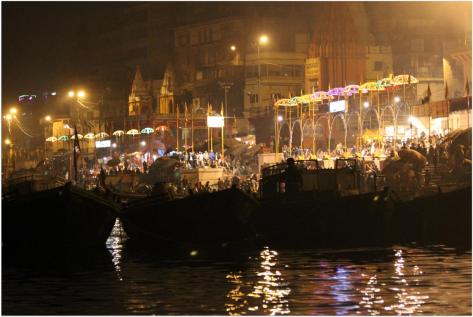 Most of the ghats are bathing ghats, while others are used as cremation sites. 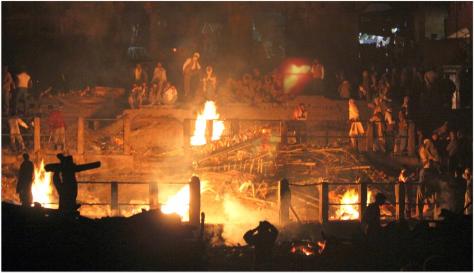 Flash not allowed at cremation ghat and my settings were off

Morning boat ride on the Ganges across the ghats is a popular visitors attraction. The miles and miles of ghats makes for the lovely river front with multitude of shrines, temples and palaces built “tier on tier above the water’s edge”.

The Dashashwamedh Ghat is the main and probably the oldest ghat of Varansi located on the Ganges, close to the Kashi Vishwanath Temple.

It is believed that the god Brahma created it to welcome Shiva and he also sacrificed ten horses during Dasa -Ashwamedha yajna performed here. 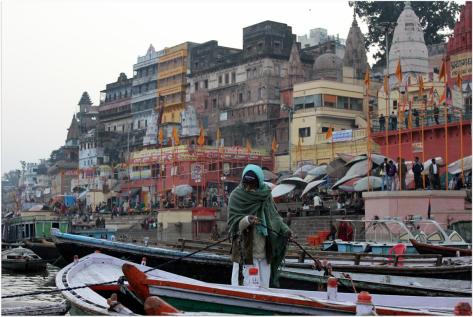 Above the ghat and close to it, there are also temples dedicated to Sulatankesvara, Brahmesvara, Varahesvara, Abhaya Vinayaka, Ganga (the Ganges), and Bandi Devi which are part of important pilgrimage journeys.

A group of priests perform “Agni Pooja” (Worship to Fire) daily in the evening at this ghat as a dedication to Shiva, Ganga, Surya (Sun), Agni (Fire), and the whole universe.

Special aartis are held on Tuesdays and on religious festivals. The Manikarnika Ghat is the Mahasmasana (meaning: “great cremation ground”) and is the primary site for Hindu cremation in the city. Adjoining the ghat, there are raised platforms that are used for death anniversary rituals. 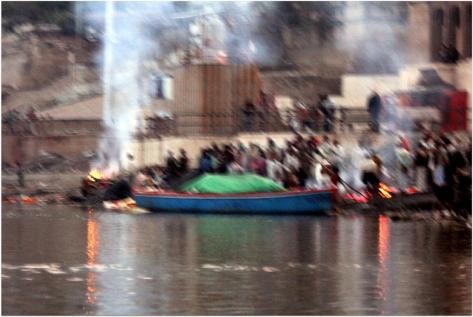 Flash not allowed at cremation ghat and my settings were off

It is said that an ear-ring (Manikarnika) of Shiva or his wife Sati fell here. According to a myth related to the Tarakesvara Temple, a Shiva temple at the ghat, Shiva whispers the Taraka mantra (“Prayer of the crossing”) in the ear of the dead. 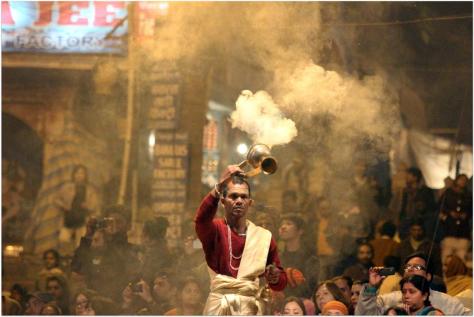 Fourth-century Gupta period inscriptions mention this ghat. However, the current ghat as a permanent river side embankment was built in the 1302 and has been renovated at least thrice.”

I also found out that kite flying (or fighting) was important in Varanasi ; but even more so in Jaipur where the youngsters and adults ran around madly after fallen kites. 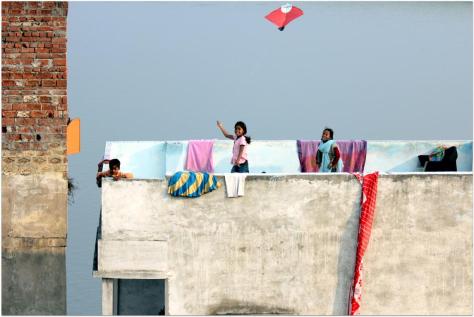 Fun in the afternoon

Rooftops were a hive of activity

She “shared” her puppies with me (rooftop of Suraj Guest House; the owner’s daughter) 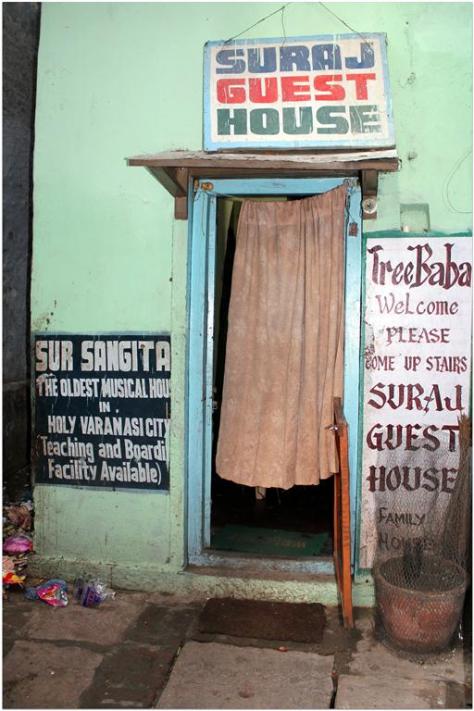 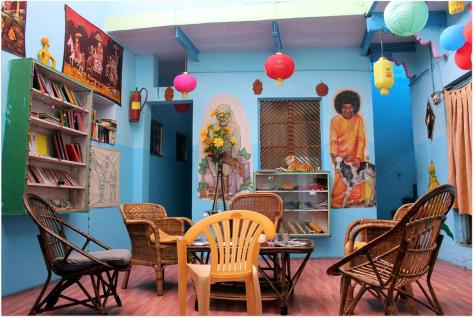 No post about Varanasi would be complete if Ganga Fuji Restaurant was not mentioned. The owner Kailash asks that you design a “country of origin” poster for his wall

Some uninformed person called the food bland. The owner cooks exactly what you ask for i.e. freaking hot spicy or mild like a cucumber 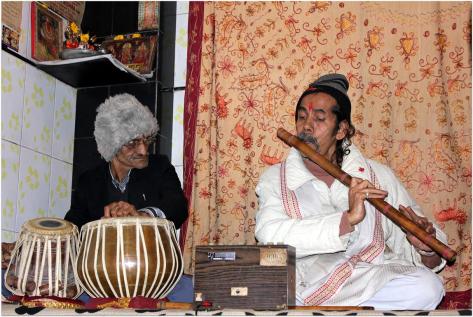 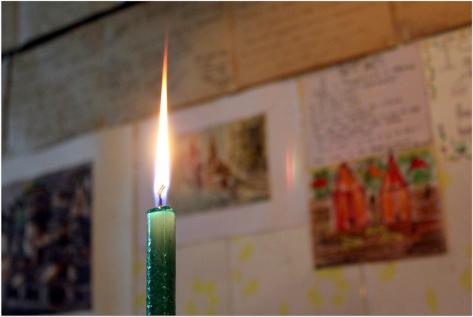 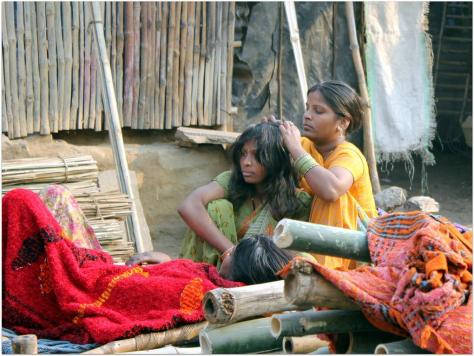 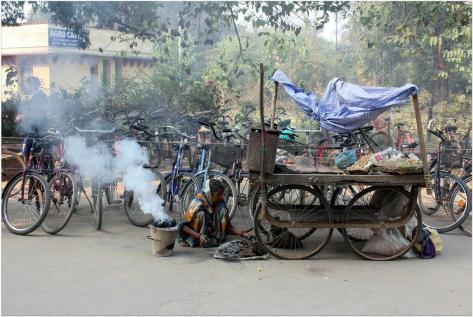 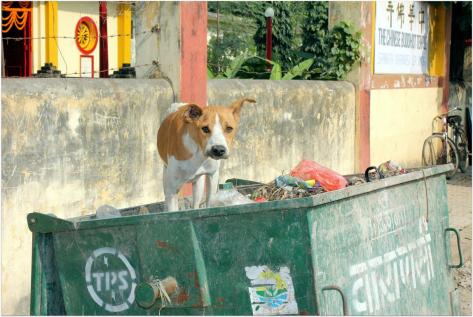 Sarnath is where Buddha gave his first sermon.

It was a lovely break from the hustle and bustle of Varanasi, but we will leave all of that for another day & post.

A World of Prayer

A must watch documentary filmed at Varanasi:

Get ready for a pukka SNAP FLY COOK adventure.

Little India is right here in Durban, South Africa – on my doorstep.

“Durban’s Bangladesh Market, which is located in the suburb of Chatsworth provides a fascinating introduction to contemporary Indian way of life in Durban and is a nostalgic reminder of Durban’s famous old Indian market of yesteryear.

The original Bangladesh market was established in the 1980’s born from the need to provide especially the senior citizens and pensioners of the Chatsworth area with fresh produce at prices they could afford. Market gardeners saw great potential in this market because they could trade directly to the public, there was no middle man, and so a partnership between the market gardeners and the pensioners was established. The market then moved to Chassie Village, and soon pockets of markets started springing up everywhere, in and around the area.The old apartheid municipality tried to get rid of these markets and so they were all moved to one premise, the current location of Bangladesh market.
The establishment of the market was an historical victory for the Senior Citizens of Chatsworth who overcame adversity by fighting for what was rightfully theirs. The Bangladesh Market today is a tribute to their heroic efforts and unwavering courage and strength, attributes which characterized the general nature of those who fought for freedom in the struggle against apartheid. The fact that the Bangladesh Market in  Chatsworth, Durban is still a thriving and bustling centre of the community, is a triumph in itself.” ~ Website www.zulu.org.za 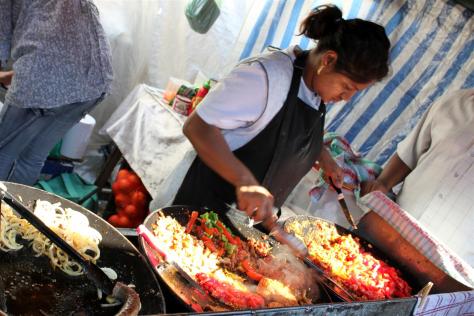 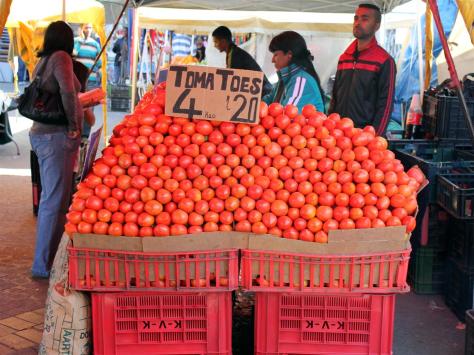 Now to start this post off properly; let’s understand that I am not friends with the owner. He did not offer me shares in the business or a free sandwich.

I love Indian food, food cooked with care and attention, value for money, deep tastes, tinges or splurges of chilli, bright colours, semi fat free, creamy but with no cream and did I forget to mention: value for money!

Yes, I am a little vocal about this subject because I am a fair cook (I can fry more than an egg) and don’t like wasting money.

So when I get served up a lump of sh!%$#*! or a few crumbs for many pennies, then I would rather go to the market, buy my own goodies at “cost” and cook a hearty tasty value for money real deal meal myself.

Now having heard the BIG rumours around town about  Kara Nichha’s value for money, I just had to go an investigate (three times now).

Without further delay, let’s zoom in with a Canon camera to all see what’s going on at a vegerterian palace. 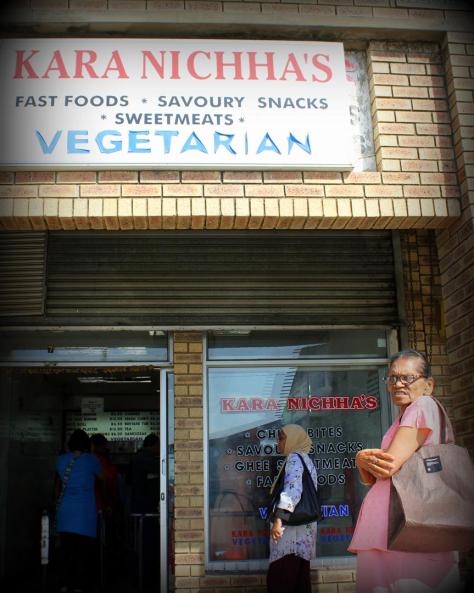 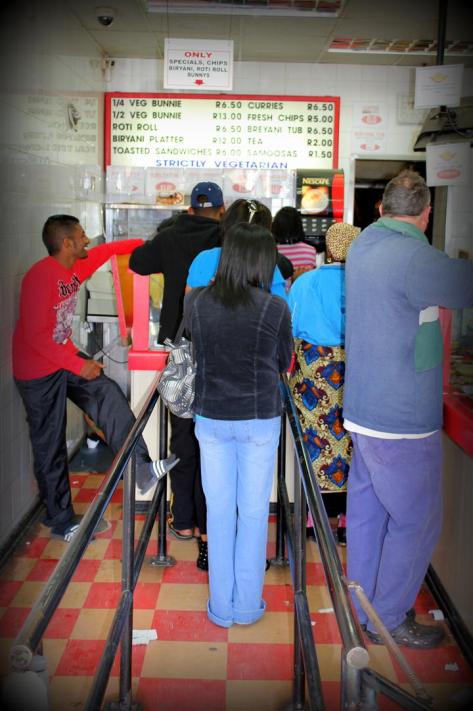 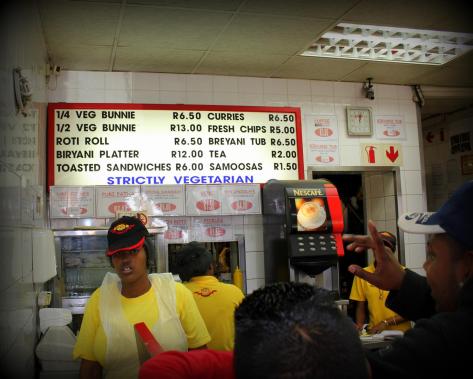 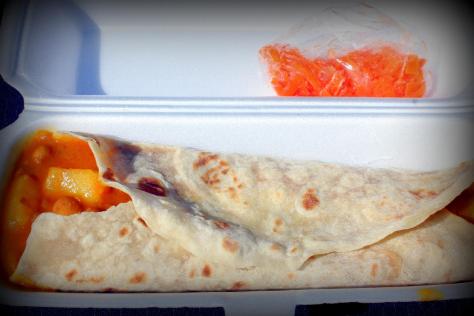 Some more treats and snacks

It’s so tasty you could drink it

Stop licking your lips and immediately head over to: 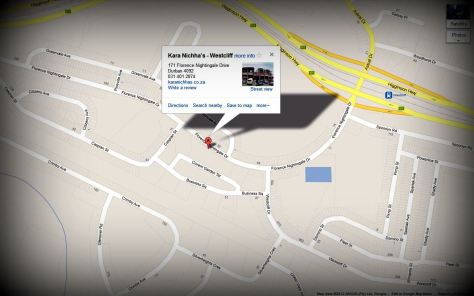