I had two sunrise shoots at Gateway of India, the first being uneventful insofar as unwarranted attention goes. The light was beautiful but not what I am used to. The second shoot was spent explaining to an officer the necessity of using a tripod to shoot long exposure stills. During the day there are many “resident” photographers present taking photos of tourists with the Gateway as a background. The perimeter and surrounding area is heavily guarded and a section of the Wikipedia article below reveals why.

“The Gateway of India is a monument built during the British Raj in Mumbai (formerly Bombay), India. It is located on the waterfront in the Apollo Bunder area in South Mumbai and overlooks the Arabian Sea. The structure is a basalt arch, 26 metres (85 feet) high. It lies at the end of Chhatrapati Shivaji Marg at the water’s edge in Mumbai Harbour. It was a crude jetty used by the fishing community which was later renovated and used as a landing place for British governors and other prominent people. In earlier times, it would have been the first structure that visitors arriving by boat in Mumbai would have seen. The Gateway has also been referred to as the Taj Mahal of Mumbai, and is the city’s top tourist attraction.

The structure was erected to commemorate the landing of their Majesties King George V and Queen Mary at Apollo Bunder, when they visited India in 1911. Built in Indo-Saracenic style, the foundation stone for the Gateway of India was laid on 31 March 1911. The final design of George Wittet was sanctioned in 1914 and the construction of the monument was completed in 1924. The Gateway was later the ceremonial entrance to India for Viceroys and the new Governors of Bombay. It served to allow entry and access to India.

The monument has faced three terror attacks from the beginning of the 21st century; twice in 2003 and it was also the disembarkation point in 2008 when four gunmen attacked the Taj Mahal Palace & Tower.

After the 2008 Mumbai attacks, there has been a proposal to close all these jetties and replace them with two newer ones to be built near the Bombay Presidency Radio Club nearby. The second and third jetties are the starting point for tours of Elephanta Caves, which is a 50-minute boat ride away by ferry. Other routes from the Gateway include ferry rides to Alibaug and Mandwa; these ferries are said to carry passengers above their certified capacity due to their popularity.

The Gateway of India is a major tourist destination and a popular gathering spot for locals, street vendors and photographers. In 2012, Maharashtra Tourism Development Corporation moved the “Elephanta Festival of music and dance” from its original location at Elephanta Caves (where it had been celebrated for 23 years) to the Gateway due to the increased capacity offered by the venue. The Gateway can host 2,000 to 2,500 people, whereas Elephanta Caves could host only 700 to 800 people.

A bomb planted in a taxi exploded near the gateway in the 2003. The gateway was also the site of a major bomb-blast in August 2003 and was the disembarkation point of the terrorists participating in the November 2008 terror attacks when four gunmen attacked the Taj Mahal Palace & Tower. Public movement in certain areas was restricted after the 2008 attacks”. 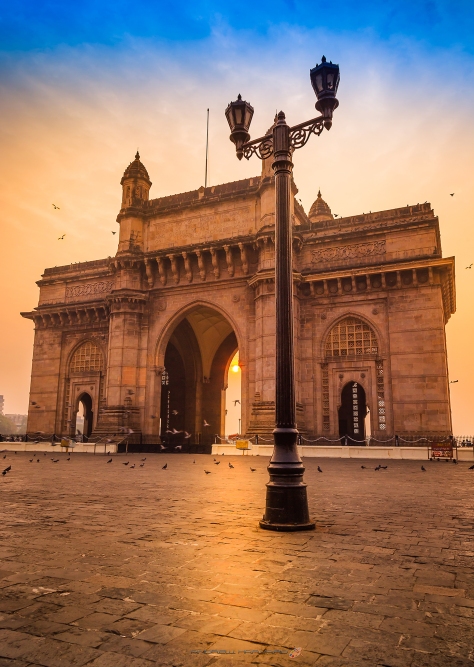