KZN floods cause chaos June 2008: “Tourists and residents were evacuated from resorts, and roads and bridges have been closed as drenching rain led to flooding in many areas of KwaZulu-Natal.

Heavy rains caused havoc in parts of the province overnight, washing away bridges, flooding roads and causing damage to homes and property.

According to the National Sea Rescue Institute’s Craig Lambinon, residents of Club Marina at Ifafa were rescued at midnight after all but three homes in the area were submerged.

“Emergency services had to use jet skis to rescue people because there was too much debris in the water to use a rubber duck boat,” he said, adding that he was not aware of any casualties.” ~ Daily News reporter.

An article, “South coast residents battle mud and debris”, by Sharlene Packree of The Witness is far more informative:
“While mopping up on the south coast continues, residents say that every day is a battle living in homes that are filled with mud and debris left by the recent floods.
The Witness visited Club Marina near Ifafa beach, one of the worst hit areas, yesterday and spoke to residents as they shovelled thick mud, tree branches and other debris from their once luxurious homes.
The home of pensioners Myrtle and Tony du Toit, who were killed in the flash flood that struck the area last week, was covered in mud. Their belongings were scattered around the tiny house in Crayfish Lane at the bottom of the complex.
Yesterday, municipal workers were busy removing mud from the homes, while big trucks transported soiled mattresses, broken televisions and damaged furniture away. Armed with spades, residents helped workers remove the mud that filled their houses.
A heavy stench hung in the air, as the sewage system overflowed during the floods.
The floods hit just after Francelina dos Santos had moved into her own home and was preparing to start a new life. She moved into the Club Marina complex in May and had bought brand-new furniture and appliances.
Everything was damaged in the flood.“I was so excited about living on my own. The complex was a beautiful and serene place and I knew that life would be good here. I didn’t think I would lose everything I owned here,” she said.
Dos Santos said she was alone when the rain started and heard neighbours screaming for help. “The water in my bedroom rose to the ceiling, it also pushed the door down. Luckily, I managed to escape through a tiny window,” she recalled.
She said she still has nightmares and has asked her mother to live with her while she salvages her house and what’s left of her possessions.”
I found myself at Club Marina in the weeks that followed.
The subsiding water revealed household property to be missing, washed out to sea, forced up against burglar proofing or lying on the roofs of the battered houses.
The memories of walking in Crayfish Lane in thick knee-height mud and speaking to the distraught residents who “lost their lives” in the flood is still fresh in my mind.
I was not there to take photos but over the years since my visit always stop and ponder when I come across the single photo below.
The Mercedes Benz sedan was not originally parked at the photographed location and the water rose above the height of the houses shown in the road. I saw a washing machine of the roof of a house.
Unlike most other floods one hears of, I seem to recall that there was no warning of this flood and most of the residents were asleep when it struck in the dark of the night.
The bottom photo is the “low-quality” 100 KB original JPEG.
The middle photo is a “one-touch” HDR lookalike created with Picasa.
The first photo shown directly here-under was today’s actual beginner experiment.
I used the original photo to create two others with an increased and decreased exposure level. I then used Photomatix to “join” all three into a single “HDR”.
I am in two minds about the results of this experiment but will try again.
Perhaps some of the experienced photographers could offer some input here – is this method beneficial when one does not have three “properly” bracketed photos? 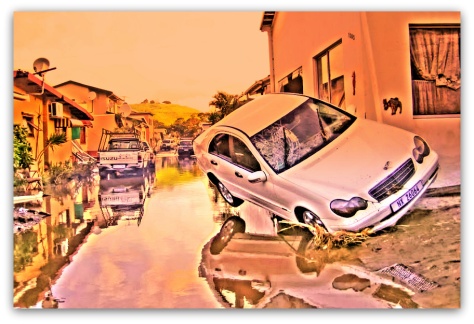 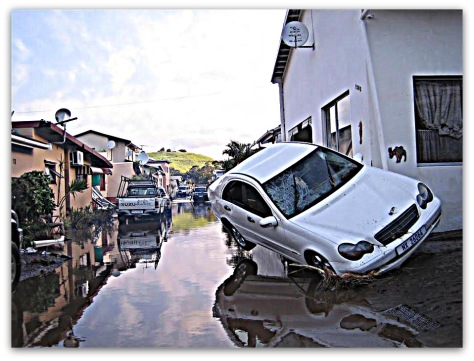 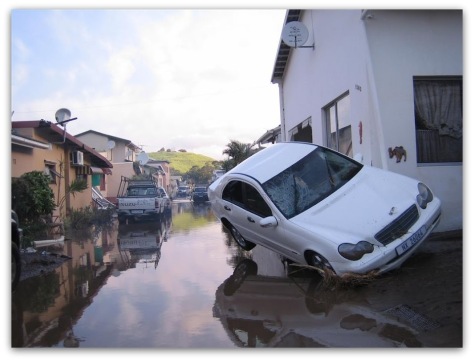