“The arrogant, judgmental and egotistical appear to think they are better than us. Truth is, they are attempting to convince themselves that they are. Judging a person does not define who they are (for we really don’t know), but it does question why we are so ready to make such assumptions – and what it is within us that we are projecting upon them” ~ Unknown

Go have a look as there is a huge difference between seeing one of these photos on your 18 inch monitor and being surrounded by 14 of them live at 46.8 inches each! Plus you can grab a glass of wine and light pasta while you sit there in this awesome Durban weather.

Please save this date and join me at my first ever photo exhibition at the trendy Side Bar part of Spiga d’oro Florida Road Durban.

Prints will be on sale for the opening night only at discounted prices.

There will be music and wine & pasta on sale as usual.

A lovely evening to be had by all.

“Stay happy, good and true to yourself always, and savour every moment of life; it is very precious” ~ Margaret Harvard

You choose how you view your life… What you want to talk about and thereby give power to.

Both photos are the same image taken on a drizzling overcast morning.

“Umhlanga is a residential, commercial and resort town north of Durban on the coast of KwaZulu-Natal, South Africa. It is part of the eThekwini Metropolitan Municipality, created in 2000, which includes the greater Durban area. Commonly and erroneously pronounced (by residents and visitors alike) as Umshlanga (the correct pronunciation of “hl” in Umhlanga is similar to the Welsh “ll”), the name means “place of reeds” in isiZulu.

Umhlanga is named after the Ohlanga River, which reaches the Indian Ocean three kilometres north of the town.

The Oyster Box, a luxury hotel since the 1930s, was originally built as a beach cottage in 1869, before the town had even been founded.

In 1895, Sir Marshall Campbell founded Umhlanga. The town’s first hotel was established in 1920, followed by a shop, a lighthouse, the Natal Anti Shark Measures Board (today called the KwaZulu-Natal Sharks Board) and further hotel developments.[2][3]

The Borough of Umhlanga was formed in 1972 through the merger[citation needed] of Umhlanga Rocks, a seaside resort town, and the suburb of La Lucia.

Umhlanga, specifically the former sugarcane fields of Umhlanga Ridge, has become the focus of development in the greater Durban area with many businesses relocating offices from central Durban (similarly to Sandton forming the new centre of Johannesburg), a move that has been criticized for “fragmenting the urban fabric” and furthering “the new apartheid” in Durban.[2] In 2010, Durban International Airport was moved to La Mercy, near Umhlanga, and reopened as King Shaka International Airport.” ~ Wikipedia

The Beverly Hills Hotel looks down onto the lighthouse and it a 5 Star Tsogo Sun establishment.

The theme on the KZN Hub is “M” and I simply had to rework this “old” photo I had of Durban. I have called it “Magnificent Durban” to suit the theme but more importantly because I believe that it truly showcases my home town that I love very much.

Louis En Marie Helberg arranged this shoot for us in the CBD in April 2014.

This is your town! I Love Durban 🙂 with the Indian Ocean in the background. 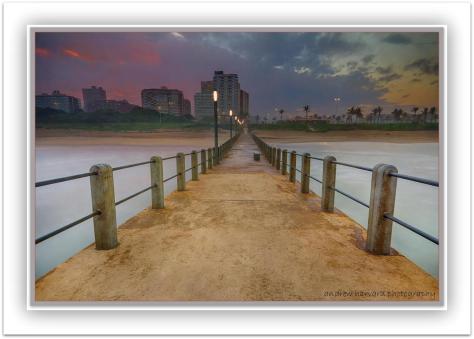