This is another one of her splendid curry creations we enjoyed for dinner, which also means lunch for me today (lucky me!).

As you know, I can’t give you Timol’s recipe – it’s a family secret (not). You could look at Anjum’s recipe if you need a hint or two.

What do you do when your local pizza outlet starts charging you exorbitant prices like a vendor trying to keep the Italian Mafioso and his own wife happy?

I’ll tell you. You take matters into your own hands.

I bought some frozen pizza bases, mushrooms, green peppers, cheese, onion, mince, smoked chicken, chilli and headed home. I then hauled even more ingredients (like garlic) out of the cupboard and fridge.

All got chopped up and loaded or sprinkled, as the family ordered (some were veg-fasting), onto the pizza bases and thrown into the oven at 220 degrees centigrade for about 25 minutes.

The photos below were taken before the oven stage.

We added Veri-Peri sauce before eating.

Her last two chicken curries have really shot tongues out, caused a ruckus and had crowds diving in for thirds.

The second version shown below was a defrosted chicken that escaped getting roasted but that ended up getting spiced-up.

We enjoyed the dish with a selection of roti, rice or bread. 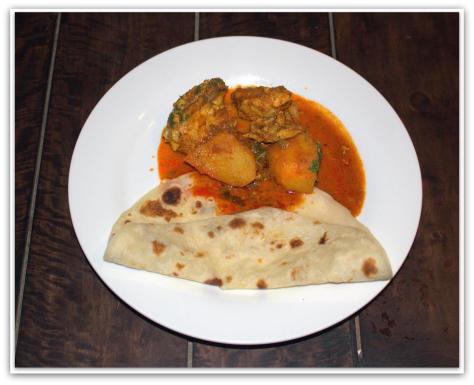 I can’t give you Timol’s recipe – it’s a family secret (not).

You could look at Anjum’s recipe if you need a hint or two.

What do you do when your local chicken outlet starts charging a cock and a rooster for one small Portuguese Peri-Peri Chicken Burger? I’ll tell you. You take matters into your own hands.

Head along to your local Durban stores and buy:

Braai (barbecue) over a medium heat

Clean and cut to size 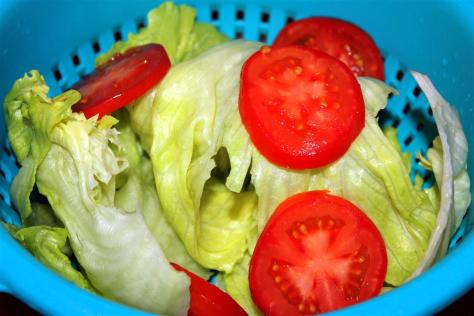 Slice the rolls in half and spread the Flora on the bottom half. Spread the Trim and more Veri Peri generously on the top half

See what I mean? 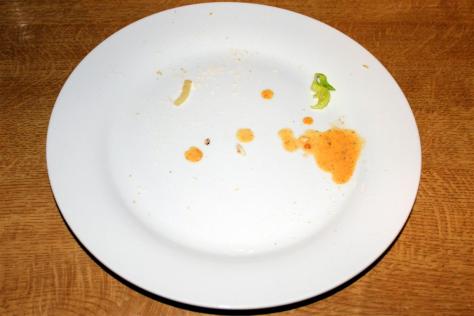 The Weber braai has been neglected for a few years now (he confesses with an embarrassed look on his face).

It was due time to give Timol a break and there was dead but fresh chicken laid out in the kitchen.

I vaguely recalled the “indirect method” of cooking.

“Indirect braaing is the right method for cooking thicker foods and anything that is likely to have burnt on the outside (surface) before it has had time to cook through to the middle. For example, cuts of meat over 5 centimetres in thickness or foods that are so delicate that direct exposure to the heat source would dry them out or scorch them. Also use this method for grilling with a rotisserie.

It is similar to roasting, but with the added benefits of that grilled texture, flavour and appearance you can’t get from an oven. Heat rises, reflects off the lid and inside surfaces of the grill, and slowly cooks the food evenly on all sides. The circulating heat works much like a convection oven, so there’s no need to turn the food.”

Now I would be lying if I told you exactly what I rubbed onto and into Mr Raw Skinless Chicken and some par-cooked potatoes on Sunday the 29th of July 2012, but it was something along the lines below:

The chicken and potatoes were placed onto a baking tray, sealed with aluminium foil and dumped onto the grill (two trays of coal burning on either side of the tray). The lid was then placed on to cover the braai.

Photograph before sealing with foil

The Weber did its thing for about 45 minutes before I removed the foil to brown the top for another 20 minutes or so (don’t wait so long next time).

The final product, dished up in a casserole dish, is shown below

Here is another good example of Timol’s hot-shot ability to whip up a quick tasty meal: