Wikipedia ~ “Chatsworth, is a large suburb created in the 1960s to house the predominantly South Africa Indian population. The suburb is situated in South Durban basin in South Africa and is roughly bordered by the Umhlatuzana River in the North and Umlaas River in the South.

In the 1940s, The Pegging Acts and the Ghetto Act were passed. These acts gave the government the right to remove and destroy shacks and small self-made shelters, with the putative intention of improving sanitary conditions. This led to the Group Areas Act of June 1950, which designated certain areas for the Whites and other areas for Indians, Coloureds and Africans. Indians were removed from areas such as Mayville, Cato Manor, the Clairwood, Magazine Barracks, Bluff, Riverside, Prospect Hall, Duikerfontein and Sea Cow Lake. The removed populace was moved into primarily the two large Indian suburbs of Phoenix, which is situated North of Durban, and Chatsworth in the South.

During the later 1940s and early 1950s, there were advertisements in the papers of an exclusively Indian suburb, Umhlatuzana. Then in the early 1960s Chatsworth was planned, opening in 1964 and consisting of eleven neighbourhood units. Modern day Chatsworth is spread over seven municipal wards which all fall roughly in the South Central municipal area. Chatsworth was deliberately built to act as buffer between white residential areas and the large African township of Umlazi.”

Get ready for a pukka SNAP FLY COOK adventure.

Little India is right here in Durban, South Africa – on my doorstep.

“Durban’s Bangladesh Market, which is located in the suburb of Chatsworth provides a fascinating introduction to contemporary Indian way of life in Durban and is a nostalgic reminder of Durban’s famous old Indian market of yesteryear.

The original Bangladesh market was established in the 1980’s born from the need to provide especially the senior citizens and pensioners of the Chatsworth area with fresh produce at prices they could afford. Market gardeners saw great potential in this market because they could trade directly to the public, there was no middle man, and so a partnership between the market gardeners and the pensioners was established. The market then moved to Chassie Village, and soon pockets of markets started springing up everywhere, in and around the area.The old apartheid municipality tried to get rid of these markets and so they were all moved to one premise, the current location of Bangladesh market.
The establishment of the market was an historical victory for the Senior Citizens of Chatsworth who overcame adversity by fighting for what was rightfully theirs. The Bangladesh Market today is a tribute to their heroic efforts and unwavering courage and strength, attributes which characterized the general nature of those who fought for freedom in the struggle against apartheid. The fact that the Bangladesh Market in  Chatsworth, Durban is still a thriving and bustling centre of the community, is a triumph in itself.” ~ Website www.zulu.org.za 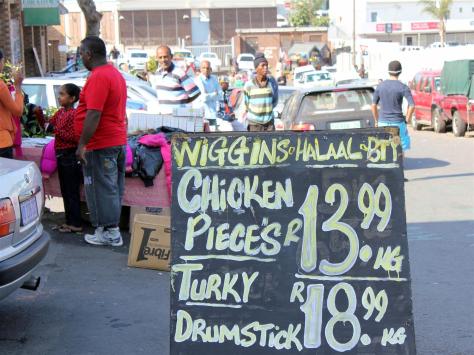