Sunrise this morning with Prakash at Moyo Ushaka on uShaka Beach. Coffee afterwards at The Coffee Guys 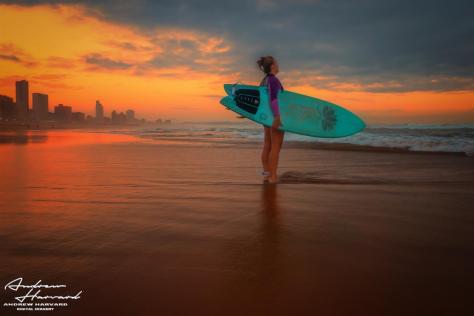 “Be a lamp to those who have lost their way. Be a doctor and nurse to ailing patients. Be a boat and bridge to those who want to reach the other shore of peace and happiness. Remove sorrow by means of kind and loving words. Make a man smile when he is in despair. Cheer him up when he is afflicted” ~ Sri Swami Sivananda

This is my last and perhaps favourite of the sunrise on Saturday 13 Jan 2018 at Moyo Ushaka on uShaka Beach.

I shot sunrise this morning near The Beverly Hills on the beach at Umhlanga Rocks, KwaZulu-Natal. Afterwards I went to Coffee Guys for a hot cuppa.

Canon South Africa Canon G3X used with a light bulb I picked up in the sand!

A farmer had a horse but one day the horse ran away, so the farmer and his son had to plough their fields themselves. Their neighbours said, “Oh, what bad luck that your horse ran away!” But the farmer replied, “Bad luck, good luck, who knows?”

The next week the horse returned to the farm bringing a herd of wild horses with him. “What wonderful luck!” cried the neighbours, but the farmer responded, “Good luck, bad luck, who knows?”

Then the farmer’s son was thrown as he tried to ride one of the wild horses, and he broke his leg. “Ah, such bad luck,” sympathized the neighbours. Once again, the farmer responded, “Bad luck, good luck, who knows?”

A short time later, the ruler of the country recruited all young men to join his army for battle. The son, with his broken leg, was left at home. “What good luck that your son was not forced into battle!” celebrated the neighbours. And the farmer remarked, “Good luck, bad luck, who knows?” 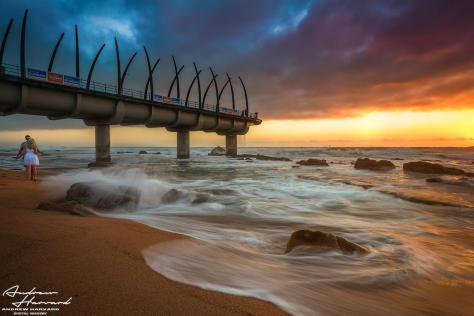 “Adversity Breeds Opportunity. One of the best things I can share with you is the idea that every setback carries with it an even greater opportunity. Every curse has a corresponding blessing. Every seeming failure brings with it some gift – some doorway that if you have the eyes to see it and the courage to walk through it will make you even more successful than you were before the difficulty” ~ Robin Sharma.

On Sunday 14 Jan 2018 I shot sunrise at Umhlanga. While happily bracketing shots (my camera set on AV and instructed to take 5 different exposures consecutively of same scene), an over-eager, no photography etiquette person, instructed her happy / laughing couple into my angle of view onto some rocks (as if there is only one set of rocks at Umhlanga ROCKS).

The “photographer”, before posing in front of me with a wide sumo type stance (presumably for balance on the sand), did cock a quick glance at me and say “sorry”.

The “sorry” was clearly not well-meant, and was laced with a look of “sorry buddy but I own this beach” (there might have been an inkling of guilt in those AUTO JPG eyes).

They then went out of picture for a while to paint “I love you” in the sand and fire their pop-up flash like hell to my left. I breathed a sigh of relief.

While contemplating whether or not I should stop shooting, and go run behind her couple and photo-bomb the hell out of them, I thought that maybe there was a blessing in all of this. When do you get a couple that you didn’t organise, to pose for “free”!

They came back into my frame and I tried not to smile.

I sat quietly behind my camera, carefully raised the ISO high (640) to enable 5 fast / high speed shots with the couple still. I then dropped the ISO to 50 to get the swirling water (but couple blurry). I also had a number of shots to get the right / sun side properly exposed (not blown out / too light).

I then went home and using Jimmy’s Raya Pro & Photoshop, used the three main images mentioned above to make my favourite “shot” of the day.

PS – despite me loving this shoot I still want to photo-bomb that photographer one day!

Other camera settings: all mentioned above except the F was on 10.

“Positivity is as powerful as Negativity – feed it and it grows in leaps and bounds!”

The accompanying image was taken some time back at sunset at the Sarie Marais Pleasure Cruises jetty looking towards Point Yacht Club. I re-processed the RAW image this afternoon.

The exact original settings are unknown at time of posting as the export from LR has deleted the data. I do recall that I was on F22 and the shutter speed was about 2.5 sec. I recall this as I thought earlier today that I would rather have been on say F10 to get a quicker SS to avoid yacht movement in the water. 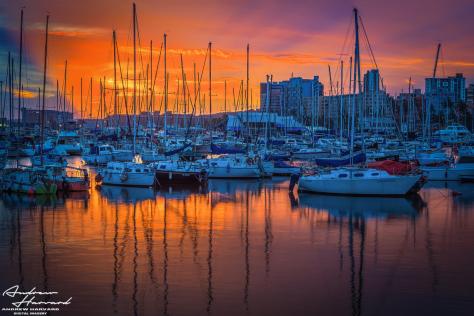 Another sunrise on the beach this morning.

NNE at 17-25 knots a bit stiff but not if you find somewhere to hide that tripod. 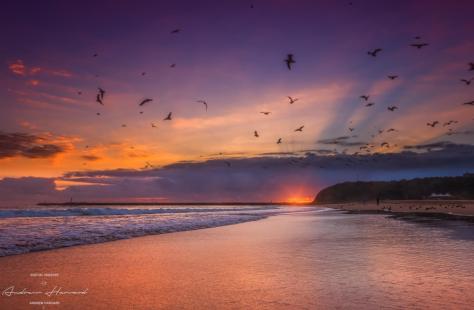 “The period of greatest gain in knowledge and experience is the most difficult period in one’s life.” – Dalai Lama

There was no sunrise this morning but it was still beautiful to have a short walk, wet the toes in the sea and then share a coffee with Prakash at The Coffee Guys.