At the time of starting to work on the photo below I was simultaneously “grumbling” about photographing sunsets and sunrises in India and how “hard” it is. Unlike in South Africa where you usually get a splendid fifteen minute or so warning in the sky that the sun is about to rise, in India the sun seemed to often rise without warning and only appear out of the haze once a few “centimetres” above the horizon. This is that same point it often disappeared at sunset before sinking below the horizon. Back home the sun can sink out of sight and below the horizon and then throw beautiful light back onto the clouds above.

The photo below was taken at Fort Cochin, Kerala at sunset and it was one of those lucky late afternoons where I got some action in the sky. A Chinese fishing net, rummaging dog, courting couples, hunting crows and boat entering the harbour complement the sinking sun.

Fort Cochin is where we found Patrick and Mary of Heavenly Homestay, who really made us feel at home and exuded much love, respect and goodwill. It was the best place I have stayed in during three trips to India. 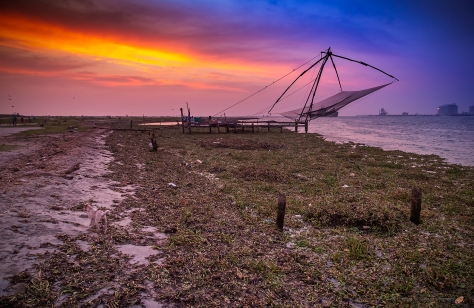