Wikipedia: “The Grand Bazaar (Turkish: Kapalıçarşı, meaning “Covered Bazaar”; also: Turkish: Büyük Çarşı, meaning “Grand Bazaar” [1]) in Istanbul is one of the largest and oldest covered markets in the world, with 61 covered streets and over 3,000 shops[2][3] which attract between 250,000 and 400,000 visitors daily. 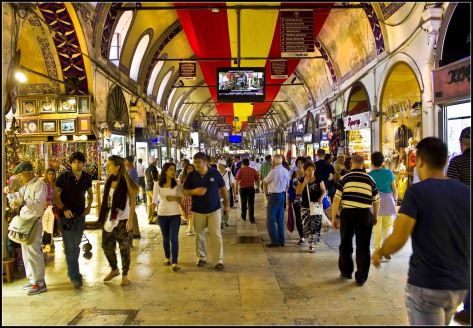 The Grand Bazaar is located inside the walled city of Istanbul, in the district of Fatih and in the neighbourhood (Turkish: Mahalle) bearing the same name (“Kapalıçarşı”). It stretches roughly from west to east between the mosques of Beyazit and of Nuruosmaniye. The Bazaar can easily be reached from Sultanahmet and Sirkeci by trams ( Line “T1”, tram stop “Beyazıt-Kapalıçarşı”).”